During a trip through Scandinavia in 2017 Giri and Nicole (re)discovered the beautiful Glaskogen Nature Reserve in Sweden. Its silence and beauty touched them both deeply and the thought arose that this beautiful area would be the perfect place for people to attune to their true nature and find more inner silence, peace and freedom. Before they knew it they found their place here within the nature reserve, and… Lakeside Retreat was born!

They welcome people from all walks of life and from all over the world to share in the magic and beauty that Lakeside Retreat has to offer. As different and diverse as their individual backgrounds are, both are experienced teachers and life-coaches and now use those talents and life experience for their meditation and yoga retreats, to provide others with a unique and beautiful setting to host their own retreat and to simply enjoy a great vacation. 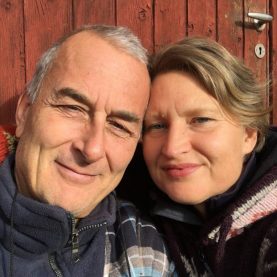 Giri (1961) was born and raised in the north of Holland. He is a proud grandfather and father of two beautiful children who are on their own path in life. After his educational period at school, and life in general, he fulfilled several jobs in different fields of profession, varying from construction work to higher management. Later on he worked as a teacher at a college specialized in logistics.

As someone who likes to take on a challenge, working as an entrepreneur or in the employment of a company didn’t satify him. The desire to know more about the deeper philosophy of life and spiritual knowledge grew stronger and stronger. 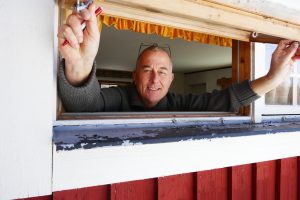 In 1989 a big change came along and Giri started practicing yoga and meditation. In January of 2005 he met Paramahamsa Prajnanananda for the first time at the Kriya Yoga Ashram in Cuttack, India. A little time later he was initated in the practice of Kriya Yoga at the Kriya Yoga Centre in Sterksel, Holland. Practicing Kriya Yoga gave him more inner focus and strengthened the desire to go more inside. This desire became even stronger when Giri and Nicole found the magical place for Lakeside Retreat in Glaskogen. 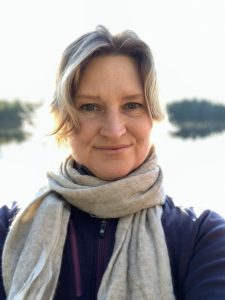 Nicole (1971) was born in the United States of America from Dutch parents and raised in The Netherlands. She first started practicing yoga at the age of nine through her mother, who took her to classes. Her spiritual practices were further awakened all through her teenage years spent in the FFYP, the special youth programme of the Findhorn Foundation that was run by and for young people from 14-23 years.

Her time at this spiritual community in the north of Scotland turned out to be a very formative one, having laid the foundation for the desire to live a life of practical spirituality.  A more balanced way of living that integrates spirituality with life’s daily activities.

After some years of extensive traveling through North- and South-America and Asia she took up Latin American Studies and Literary Science at the University of Leiden where she obtained her Masters degree. In the period that followed her daughter Zoë was born. Nicole worked various jobs, meanwhile continuing with her yoga and meditation practice.

For the last twenty years she has been studying and practicing several styles of meditation and yoga practices, including the Shambhala vision of Tibetan Buddhism, Mindfulness, Qi-gong, Iyengar Yoga, Yin yoga, Energy Medicine Yoga, Integral Hatha Yoga and Chakra Yoga. In 2004 Nicole was initiated in Kriya Yoga at the Kriya Yoga Centre in Sterksel, Holland. She continues to live inspired by the Kriya Yoga masters, as well as Tibetan Buddhism and the Integral Yoga of Sri Aurobindo and the Mother. As a Yoga Teacher, lifecoach and educator she has developed her own Life Works as a coaching practice, and teaches her Happy Hatha Yoga and Chakra Yoga classes.